With just 22 games left of the regular season and the recent additions of players like Enes Kanter and Rodney Hood, the Trail Blazers find themselves 3-0 on their current 7-game road trip. This road trip could tell a lot about this Blazers team and where they might end up in the standings come April. Today we take a look who might be the most important non-big three Trail Blazer.

This story comes from Peter Sampson our friends over at BlazerEdge released their Key to Portland's Roster Outside the Big Three. He lists a few obvious candidates to choose from and offers his own opinion on the matter as well. Is it the microwave ability of Jake Layman to get hot when needed? Is it Enes Kanter, Jusuf Nurkic’s new bullying buddy? Or is it the Swiss Army knife Al-Farouq Aminu? Sampson makes the case for Jake. “Yes, Kanter could end up being the answer by the end of the season, but he has yet to even play 45 minutes with the team. So, to this point, the Blazers’ most valuable non-Big 3 player is Jake Layman.” With the release of this week's NBA power rankings, one could argue the Chief Has Arrived! In two games from the first week back post all-star break Al-Farouq Aminu posted a combined +/- of plus-57. That was the best +/- in the league over last week. 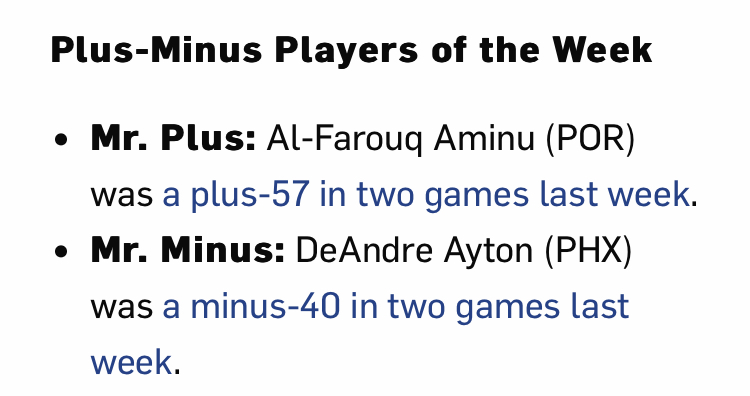 Source: NBA Week 20 Power Rankings With many media members and Blazer fans questioning the decision of Head Coach Terry Stotts to continue to start Moe Harkless, it’s telling to mention that in the same two-game span, Harkless’ +/- was a plus-54. After the win against Philadelphia, it wasn’t the scoring of Kanter or Laymen that Stotts chose to highlight. Instead, he attributed the team's success on the road so far to the defensive presence of Aminu and Harkless. “Defensively, like I’ve said for the past three years, they compliment each other with their switching and their length”. So, maybe the key to this team outside of its big three isn’t just one recent acquisition or emerging player. Maybe it’s the combined play of Chief and a healthy Moe Harkless, alongside our bullying centers, our microwave instant offense Laymen, and our two high scoring guards.

With tonight's win over the Cleveland Cavaliers, the Trail Blazers just need one more win to have a winning record coming back to Portland. I’m sure they’ll want to get greedy and they should. They’ll look to make it 4-0 in Boston on Wednesday, tipoff is at 5pm.